Quite by accident I stumbled across another very strong case of what is commonly suspected to be “Predictive Programming”.

The movie in question is “THE HAPPENING” by M. NIGHT SHYAMALAN. It’s a movie I had a slight peripheral knowledge of , but none of the specifics. I actually stumbled across a YouTube review done by a group of guys who sometimes review usually infamously bad movies as is the case here OSW Review of The Happening

This 45 min review would suffice for the basics & be more enjoyable than the full movie to most of you as well, of course if you were to want to dig into the finer points, the actual movie is the way to go.

This phenomenon has been identified many times by some very perceptive people, many of whom definitely have a special talent in this regard.

The main aspect that I add to the equation that Isn’t usually discussed in other places are the timeframes involved.

For example if a certain movie is specifically planned to function as an instance of predictive programming for an event that is hypothetically planned to occur down the road , I do believe that careful consideration is given as to perfectly “time” the release of the movie to the actual event in question.

I don’t believe it’s considered “good enough” as long as the movie precedes the actual event by a decent amount of time , rather I do think it is done in a very exact manner as “The Devil is in the Details”.

I have another article on this website that discusses this same situation w/ the same numbers as it applies to the current ongoing “Pandemic“.

That article is titled PLANDEMIC 3119 if you may be interested into looking further into it.

For an added connection to what is shown in this post , do keep in mind that CONTAGION initially released 9/3/11 as it will play directly into this comparison.

A few major plot points of this movie are bizarrely in line with current events.

This neurotoxin is quickly identified as being of natural origin and in fact coming from the plants as a self defense against human overpopulation.

The movie quickly has a solid “Population Control” narrative that dominates throughout. Population control in direct relation to the alleged Global Climate crisis. This hardline narrative woven into the plot of the movie sticks out like a sore thumb, to my view at least.

Mark Wahlberg is the main protagonist and quickly figures out many key aspects of the science behind the neurotoxin as he is a HS science teacher. [ Trust the Scientists ]

Later it is discovered that the plant life is much more likely to attack larger groups of humans and so it is strongly decided that “Social Distancing” is the rule to follow at all times.

Wahlberg also quickly & correctly decides that congregating only in small limited numbered groups of people is essential for survival, as the plants prefer to attack people in larger groups while showing a sort of “tolerance” for small groups.

This strategy proves to be correct in the movie. Who would have thought that M NIGHT SHYAMALAN would have foretold Social Distancing and low number group limits would be essential to surviving the movies unquestioned Global Climate Crisis all the way back in 2008?

In addition to those other pushed current day “new normals” face masks of different variety are also seen as advantageous to survival in this movie. 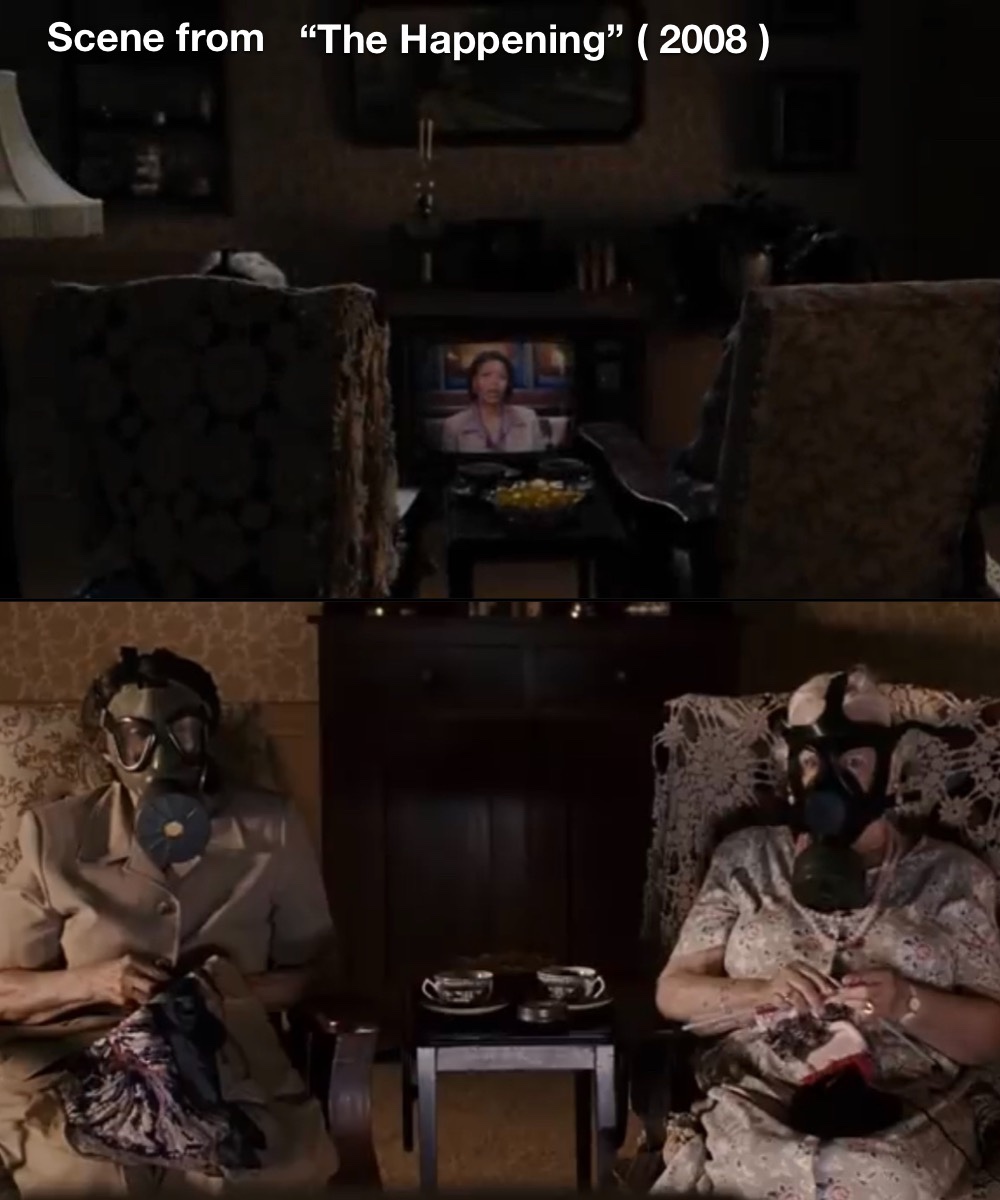 Additionally It’s established that it is best to have an overall avoidance of outside fresh air all together in the plot of “The Happening“.

The wind itself seems to be an unwitting carrier of this plant toxin & so even a gentle breeze thru a cracked window or a slit in a soft top convertible often proves to be deadly.

Wahlberg is able to help himself, his girlfriend, and his friend’s child survive long enough to reach a point in the movie where the plants suddenly call off their attack as it was seemingly a pronounced warning shot. The threat is seemingly gone just as quickly as it came.

The plot is fast forwarded a few months and it is seemingly a “happily ever after” as it is shown that Wahlberg’s GF is pregnant and that the couple has adopted the deceased friends daughter.

The montage showing the positive pregnancy test seems to me that the movies suggests that the humans didn’t learn their lesson after all in regards to population control.

The Happy Ending scene isn’t the last scene after all …

Cut to the real last scene & the viewer sees a similar scene that led off the movie in NYC’s Central Park now unfolding in front of the Louvre in Paris France as the camera also focuses onto the sky to show a Storm rolling into the same area. Is the weather (wind) actually working in conjunction with the plants to rid the earth of overpopulation? In this movie that is the reality it seems.

Additional suspicious writing can be ascertained from this movie from a dedicated scene by scene note taking. There are the faux CNN type reports that are rich in content & also the main locations of NYC & Paris along with the Climate Crisis narrative seem to potentially line up in accordance with the Paris Climate Agreement.

There is also a complete throwaway scene in which a similarly throwaway character appears for his one major scene.

The character is temporarily part of Wahlberg’s traveling group and he is overly focused with having enough “Hot Dogs” for the journey.

He is very surprised that the others in the group are puzzled by the importance he attaches to the hot dog supply. I know that plenty of potential metaphor can be taken from unnecessary scene as well.

There is also a Storm rolling in to end the movie (did we just witness the “Calm before the Storm” prior to the final scene? ). Lots of eerie connections or at least the ingredients to be led to that belief without having to do too many mental gymnastics.

One last note regarding Mark Wahlberg, between his involvement here & the awful transparent Boston Marathon Bombing movie, I think it is well within reason to question his moral integrity as it potentially pertains to his career arc.

I hope my quick rundown of the plot helped to show the possibility that this particular movie could potentially be a candidate for an instance of predictive programming. The plot says a lot to me , but what connects it most solidly are the important numbers involving time elapsed between key dates involving the 2 comparison points

My main interest lies within the numbers & the same old familiar numbers show up within the details of this widely panned movie & the ongoing COVID 19 outbreak, specifically when it became “Official“.

I have other articles on this site that go further into this particular set of numbers , but will give some connecting facts here to help illuminate the potential importance of this exact staggering of timeframe.

Flight 93 Crashed in a Field in Pennsylvania allegedly. 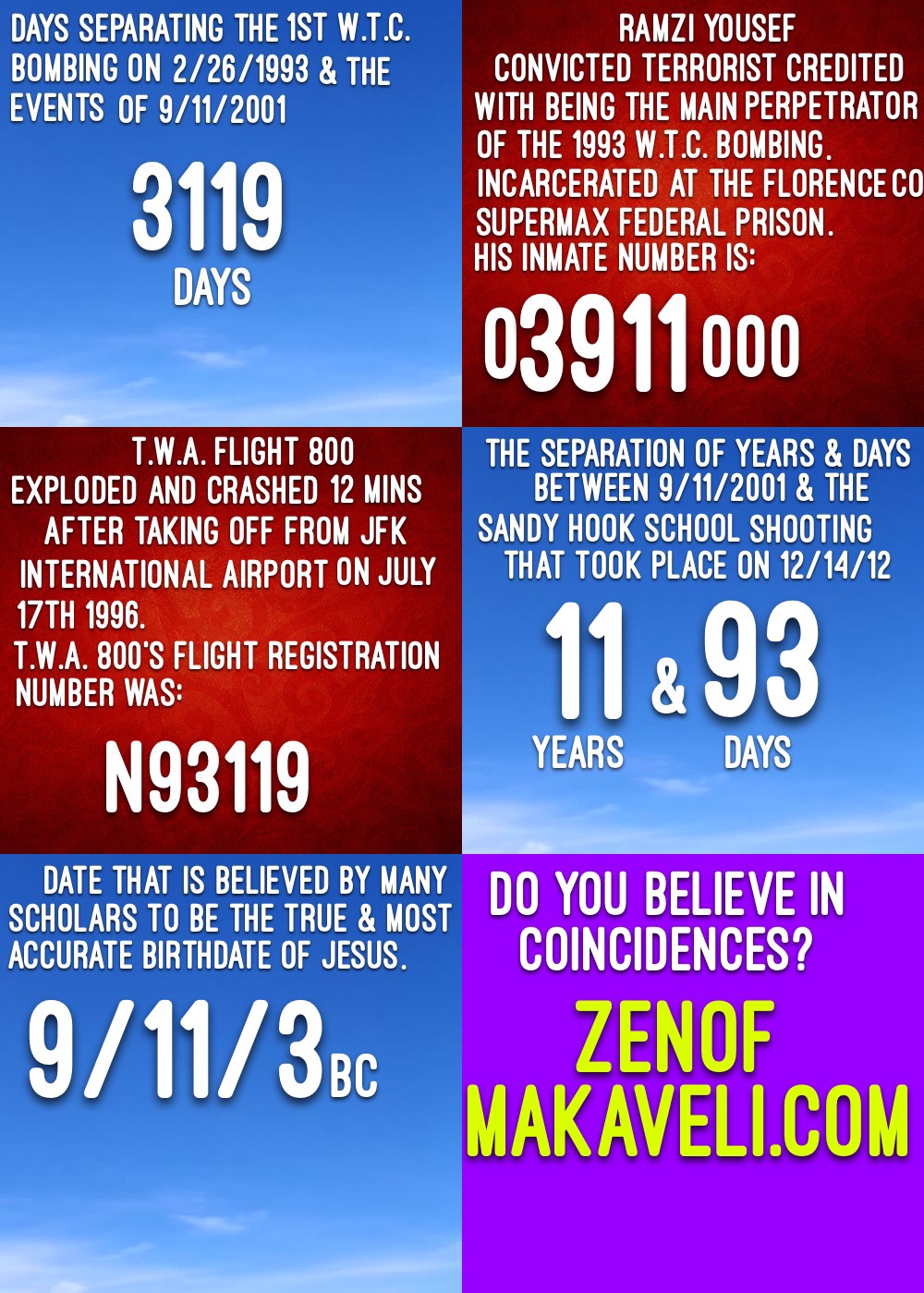 I don’t know all of the “In’s & Out’s” of what kind of process is done with these instances of Predictive Programming or why these same numbers always show up in the way they do.

It does seem that hypothetically IF “They” really want to strongly grab your attention a certain way , it is made sure that these numbers are strongly encoded into the details of the event(s).

Maybe it’s all a coincidence? IDK, but my goal is to stack up so many instances of these same numbers showing up in the same types of places to make a simple & dismissive “coincidental” outlook harder & harder to achieve at the end of the day for the reader.

Thank you for reading , it is appreciated.